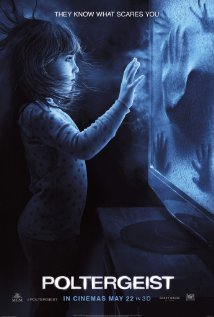 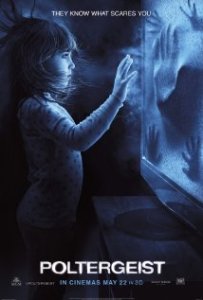 A remake of Steven Spielberg’s 1982 classic, we meet the Bowen Family – moving to a new neighborhood since Dad Eric (Sam Rockwell) has lost his job.

Convinced that the new home the realtor promises will be “the deal of the lifetime” is perfect for their family, Mom Amy (Rosemarie Dewitt) and teenage daughter Kendra (Saxon Sharbino), son Griffin (Kyle Catlett) and youngest daughter Madison (Kennedi Clements) aren’t so sure.

When their new house seems to have a mind of it’s own, Griffin knows that it’s time to go! But Eric and Amy are certain that he is just overreacting ~ that is until Madison ends up missing ~ and it seems that creepers from the world beyond have taken her in as one of their own…

Now the question is…HOW DO THEY GET HER BACK?

I give POLTERGEIST 3.5 out of 5 Stars: If you loved the 1982 Stephen Spielberg classic like I did, you will be happy to know that the original storyline was left almost in tact. Of course screenplay writer David Lindsay-Abaire had to make a few changes along the way – like bringing the technology of today into play, as it wouldn’t be a new film without adding a few twists and turns. But, if you remember any of the original film, you will be able to follow right along. Sam Rockwell and Rosemarie DeWitt are good playing the roles originally occupied by Craig T. Nelson and JoBeth Williams, and the sweet and adorable Kennedi Clements playing the role that Heather O’Rourke originally portrayed totally works too. Although, I was totally surprised that I didn’t jump once during the viewing, as I was assuming with today’s technology, that I would be jumping out of my skin the whole way through. This film also lacked a lot of the creepiness from the first film too, which made me melancholy for the viewers who have never experienced the original film. I’m not saying that it should have been just like the original, but I think they missed an opportunity, or two with this film, to really leave a lasting impression upon the audience. Sadly, as memorable as the first film was for me so many years later ~ I can still see the creepy clown under the bed like it was yesterday ~ this film and it’s slightly scary moments won’t even remain on my mind much past the finishing of this review…