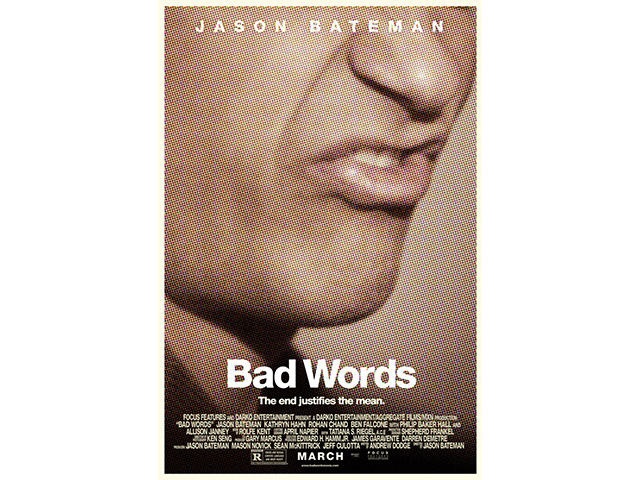 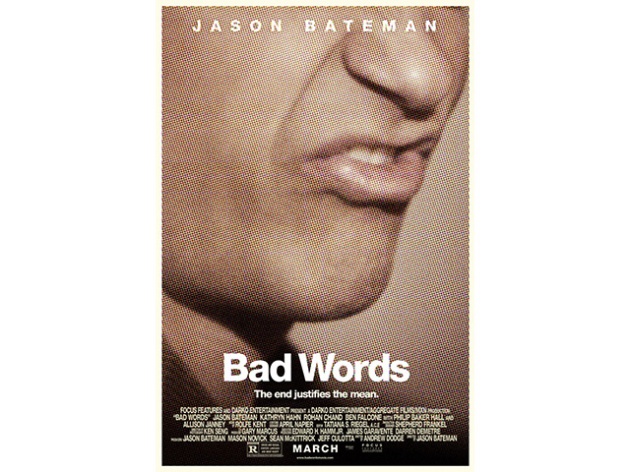 Jason Bateman sets his sights on not only acting this time around, but directing Andrew Dodge’s infectiously funny and inappropriate screenplay – BAD WORDS

As we meet Guy Trilby (Jason Bateman), he is hell bent on taking the world by storm, competing in spelling competitions – yes, you heard that right, Children’s Spelling Bee competitions.  Finding a loop hole in the rules that allows him to compete, Guy is knocking out even the brightest youngster on his way to WIN IT ALL at the National Competion – the GOLDEN QUILL!

Antagonizing the children and infuriating their parents at every turn, Guy sets his sights on going after none other than Dr. Bernice Deagan (Allison Janney), who is bound and determined to make Guy pay for the mockery he is making of the her “first love & constant companion for the last 20 years – THE SPELLING BEE.

Even though most of the children are frightened of the 40 year old trying to steal their fame and glory in the Spelling world, Guy is befriended by Chaitanya Chopra (Rohan Chand), last year’s National winner. Chaitanya is as miserable as Guy, having no friends and expected to do nothing but study in preparation for this year’s event.

Guy cannot fight the constant badgering by Chaitanya to be his friend, so the two of them set out to bring excitement to their miserable existances, as the craziness ensues……….

So why is Guy REALLY pursuing such a ridiculous accomplishment this late in his life?  And will he win the National Spelling Bee tournament, or will Chaitanya teach him not to mess with his “his new found friend”?  And what about the “friend with benefits” reporter who is investigating Guy and his crazy obsession with Spelling Bees, Jenny Widgeon (Kathryn Hahn) – how does she fit into Guy’s incredibly messed-up life?

I give BAD WORDS a B+:   Catching me totally off guard – BAD WORDS is a hilariously twisted film – yes, again, you heard that right – TWISTED.  This film is so politically incorrect, in so many ways, that I found myself trying not to laugh loud enough that anyone could hear me – as I didn’t want anyone else to know that I found the erroneous dark humor of this film to be SO GOOD.  Bateman brings his dry sense of humor along for the ride, making even the most offensive parts of the film – which there are too many to count – even funnier.  Rohan Chand is also unbelievably perfect in his role as Guys friend and nemesis – turning Bateman’s narcissistic and vial character, into the sometimes almost endearing friend and companion.  But make no mistake – this film is definitely rated R for a reason, or two, or 100!  So if you enjoy vulgarity and crudeness, added with a pinch of warmth and sincerity – get ready to laugh your “A** off” with BAD WORDS this weekend.