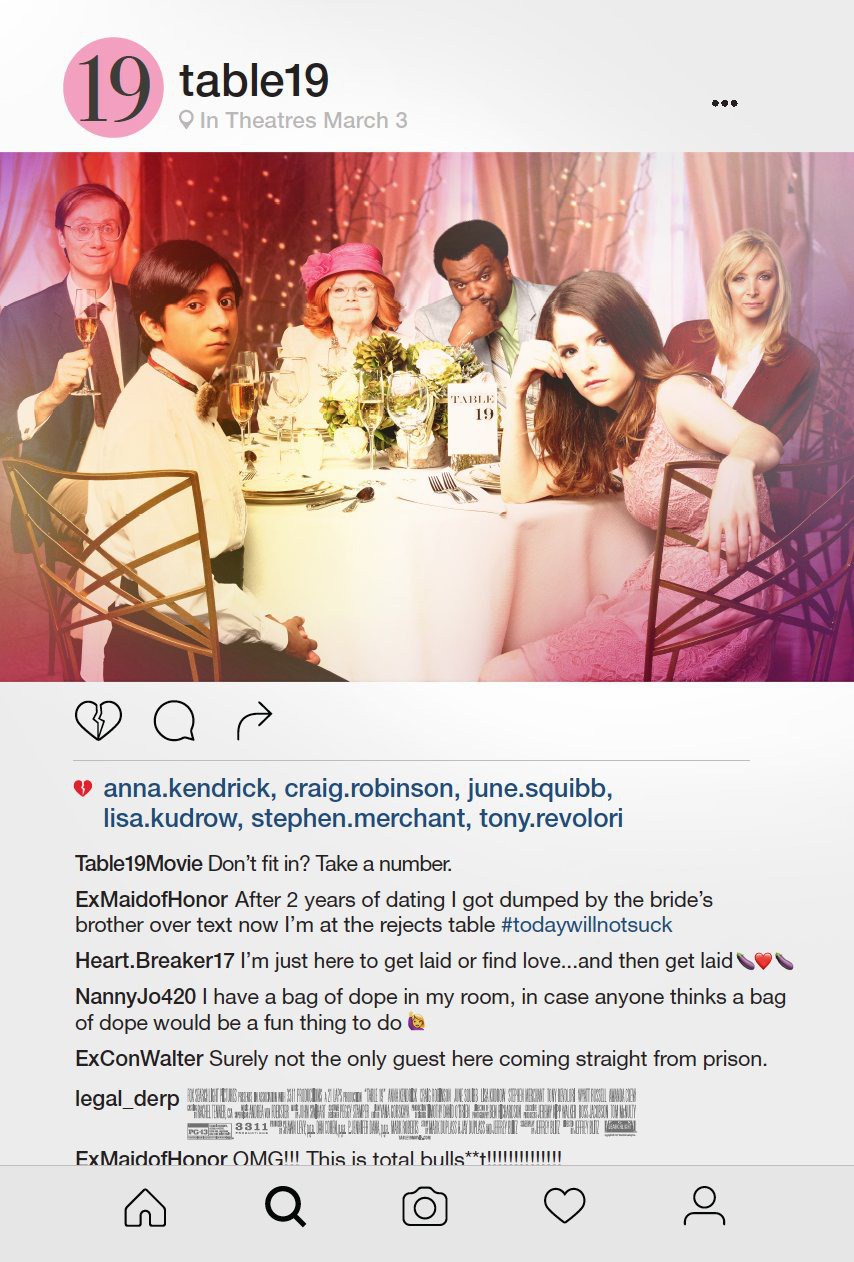 As we meet Ex-maid of honor Eloise (Anna Kendrick), she is caught between skipping her best friend’s Francine’s (Rya Meyers) wedding…having been relinquished of her maid-of-honor duties, after Francine’s brother Teddy (Wyatt Russell) dumped her a few weeks ago, or going to the wedding, and living through all of the uncomfortableness it is sure to produce…

But, as most gracious girlfriends do, Eloise decides to pull herself together and attend her friends wedding, even though her POS ex-boyfriend will also be in attendance.

Apparently not thinking all of the terrible scenarios through that might happen before returning her RSVP,  Eloise finds herself seated with a few rather peculiar sorts, all seated at the dreaded LAST TABLE / Table 19 ~ including youngster on the prowl Renzo Eckberg (Tony Revolori), barely still married couple Bina (Lisa Kudrow) and Jerry Kepp (Craig Robinson), Francine’s previous Nanny Jo Flanagan (June Squibb), and jail bird “Uncle” Walter (Stephen Merchant).

As they start to converse with one another to pass the time, they find that they ALL have some really big issues they need to deal with in their present lives, causing friendships to evolve, and lives to be forever changed, just from being seated at this “table of misfits”…

I give TABLE 19 a rating of WAIT AND CATCH THIS MOVIE ON NETFLIX OR HULU! I was so excited to see Kudrow back on the big screen, along with Kendrick, Squibb, even Robinson too, as I have enjoyed much of their previous work over the years. But, hold it right there, as that was a good idea that didn’t come to fruition, as this film ends up being so cheesy, so disjointed, so clearly contrived at every turn, you begin to ask yourself “please, for the love of God and these fabulous actors, can’t you make this movie get any better!” Kendrick is cute as always, and Russell has a few fleeting, almost memorable moments too, but from the youngster trying to get laid, to the ill-fated marriage plot, to the medicinal marijuana subplot you can figure out from a mile away, these vaguely intertwined storylines just seem to flop from her to there, never really going anywhere! So, if you want to catch these superb actors doing some really subpar work, then by all means catch TABLE 19 at a theater near you, but I would suggest that the small screen of your TV or laptop is best to view this film…so that you don’t end up being totally disappointed, having paid too much to see this garbled up mess! 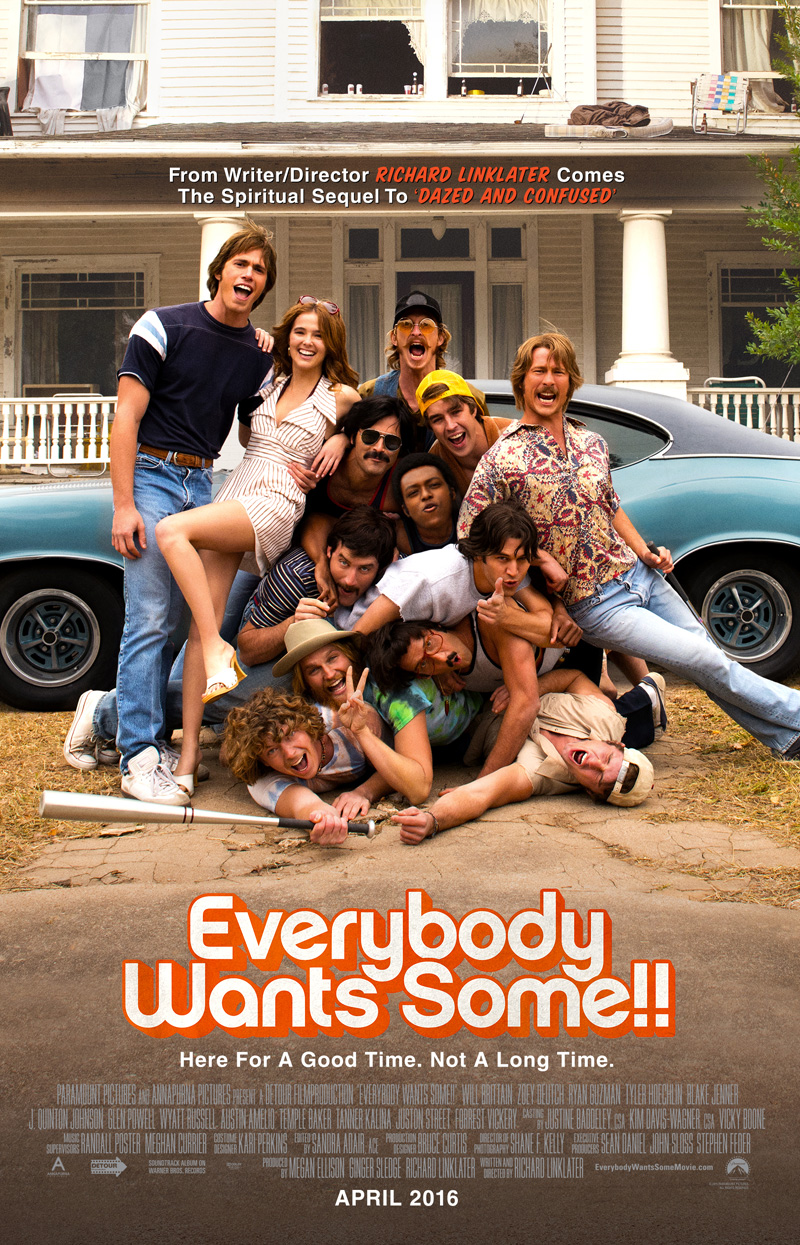 Billed as the SPIRITUAL SEQUAL to Richard Linklater’s 70’s satirical masterpiece DAZED AND CONFUSED (1993), we venture into the 80’s, College and baseball this time around ~ Welcome to EVERYBODY WANTS SOME!!!

Showing up on campus with only days till the school year begins, we meet Freshman Pitcher Jake (Blake Jenner), ready to take on College and college life one day at a time…

Thrown into the hijinks and mayhem brought on by his older teammates Roper (Ryan Guzman), McReynolds (Tyler Hoechlin) and Finnegan (Glen Powell), poor Jake better buckle in and hold on tight, and he’s about to get a quick education on campus life and how to pinch-hit, in more ways than one…

With only three days to prepare their freshman teammates for what life on their very competitive team entails, and how their new lives of Freedom in college should evolve, these BOYS OF SUMMER are ready to take on life, and Baseball, like no one else knows how!!!

I give EVERYBODY WANTS SOME a rating of MUST SEE ON THE BIG SCREEN!! ~ Maybe it’s the nostalgic feel of this film for me ~ from the clothing, to the late 70’s and early 80’s music throughout ~ heck, even the long hair and aviators drew me in ~ making this film a POP-UP SLIDE for me through each and every entertaining frame ~ and, in case you were wondering, that particular scene was one of my favorite parts of the film too J Know going in too ladies, there aren’t too many of us filling up the screen ~ except as an occasional eye candy for our team members or a potential conquest later in the evening~ but, with that said, ALL these ball players are VERY NICE TO VIEW ~ including Kurt Russell and Goldie Hawn’s son Wyatt too ~ so it’s totally worthwhile to catch this MALE BONDING FLICK, either with the man in your life, or with a few girlfriends in tow if you like, as you are going to want to catch this team on THE BIG SCREEN ~ cause it’s the only way!!