This film is simply amazing , I can’t truly describe what about it makes me shiver and cry at the same time. The character of ‘’Arthur Fleck’’ is a very complicated one. Due to the controversial ending we are unsure whether or not to trust the events that have transpired over the last 122 minutes. This movie is hands down , the best Joaquin Phoenix film and easily for me the best film of 2019. The way this film carries itself is unlike any other film I have ever seen with my own eyes. In my opinion you can’t compare Heath Ledger to Joaquin Phoenix because it shouldn’t be a contest , both actors and the characters are unique in their own ways. When you think about it, both characters are two different entities. The Joker we get in this film shows the slow descent into madness from a caring , understandable , everyday person, to a maniac who will come to wreak havoc on the city we all know as ‘’Gotham’”, which eventually gives way to our caped crusader Batman. This film is worth 2 hours of your time and then some. This picture is the best film of 2019 HANDS DOWN!!!!

It opens with one of the most gory scenes in a horror movie that I’ve seen in quite a while. This movie falls flat compared to the first one, in the sense that the best parts of the movie are the casting and the scares that are overly rambunctious. This movie to say didn’t overly disappoint me, as it does have a run time of almost 3 HOURS!!! But with that said, you definitely feel the length of the movie halfway through. If it was me, I personally would not buy this on DVD unless it would be for the jump scares. The scares may I add were not the greatest, as I know they could’ve been. A majority of the scares were flat, and felt really cheap. With little to no buildup to them, leaving you not as scared as you could’ve been.

The bright side of this movie is the casting. And despite how badly I don’t wanna admit this, Bill Hader was the best part of this movie. Sometimes his comedy was a little rushed, but throughout you see him grow the most as a character.  Sometimes you can see the best of James Macavoy, but you don’t see it in much more than just 2 or 3 scenes. This movie mostly fell flat due to the expectations I had set for it going in. Being that this movie was supposed to be the” best horror movie this year”, and then, when it wasn’t met with great review(s) at the box office, I am guessing a lot of us, not me, but a lot of us decided not even to head out to the theater at all. Despite that, in‘’IT Chapter 2’’ Andy Muschietti shows that he truly belongs in the horror genre game, and I believe we will see more from him in the very near future. 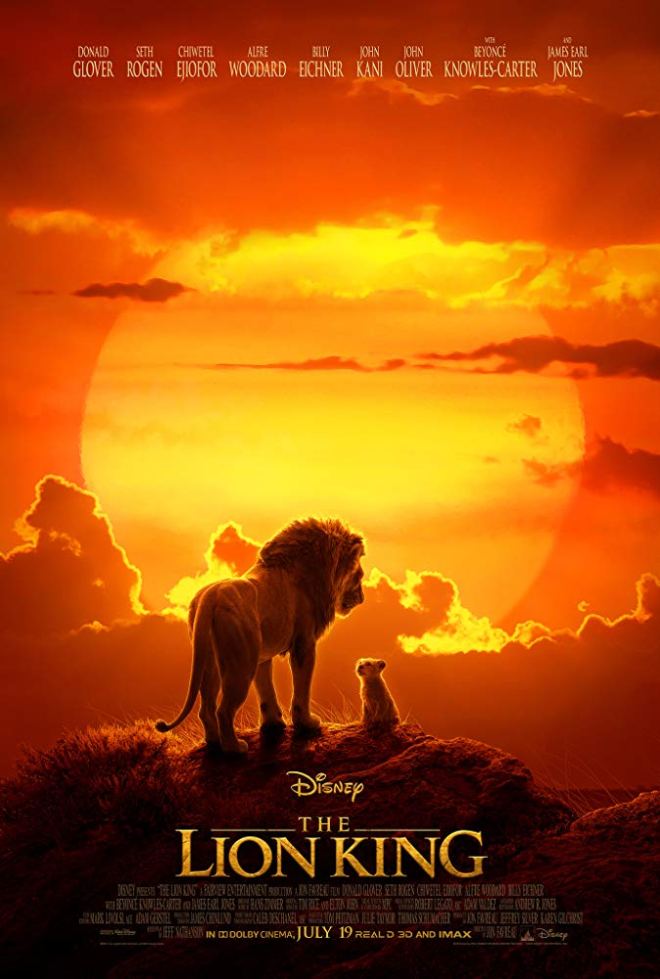 Having watched the first Lion King when I was a little boy, I understood and liked the movie very much. During my childhood was one of, if not “my favorite” Disney movie. Despite that, my expectations were heightened by the news that James Earl Jones would reprise his role as the voice of Mufasa. After this movie, I walked out as if I had just watched the regular Lion King again. To me the only thing this movie brought was, larger than life visuals. and a couple pieces of new dialogue scattered throughout the movie. This movie could have done more, and that’s a fact. I wasn’t surprised at all that this was clearly not a ‘’Reboot’’ so to speak, but a redo. Even with that, I am still happy and satisfied with this movie.

Be sure to watch for Ethan’s Reviews, as he shares “His Thoughts” on the films he can’t wait to catch, between heading off to High School this year, and his favorite sport…Baseball!

When I went to see this movie, I was terribly nervous. I was worried that in Tom Holland’s case, his second outing couldn’t live up to the expectations that “Homecoming” reached in 2017. But boy was I wrong! In my opinion every angle, and moment from Homecoming that I loved, was cranked up and dialed to 11 this time around. This movie in my eyes surpassed the hype brought on to this movie before release. I’m not saying this movie is perfect, but it is probably the best way they could execute what they were going for, in the time and space they were surrounded with after the execution of Avengers: Endgame. The performances from Tom Holland, Zendaya, and Jake Gyllenhaal take this movie from “just a Superhero movie”, into a character study of epic proportions. One thing I surprisingly liked more than I thought I would along the way too, was the romance blossoming between MJ And Peter throughout the film. This movie was honestly better than I thought it would be the whole way through, making the case that Tom Holland, as the Best Spiderman of all-time some weight.

As My Overall Rating I Give Spiderman: Far From Home, An A- .

From the opening scene, to the final battle, Avengers Endgame was a sequential masterpiece. From its incredible writing, to the pacing of this movie, it is easily one of the year’s best films, and the most satisfying movie in the Marvel Cinematic Universe. And easily, the best quality of this movie is the amount of acting brought to the table for this “Final” Avengers installment. This movie, unlike many other Marvel films, has something that those others just don’t possess. That is, the fact that this movie is definitely more of a “character study” film, than an action film…and that is one of the main things I totally enjoyed about this film. The Russo Brothers managed to show their range in the comedy atmosphere throughout as well. The comedy felt like the good natured comedy we are used to seeing from some of the movies that came before.

As My Overall Rating I Give AVENGERS: ENGAME an A+ .