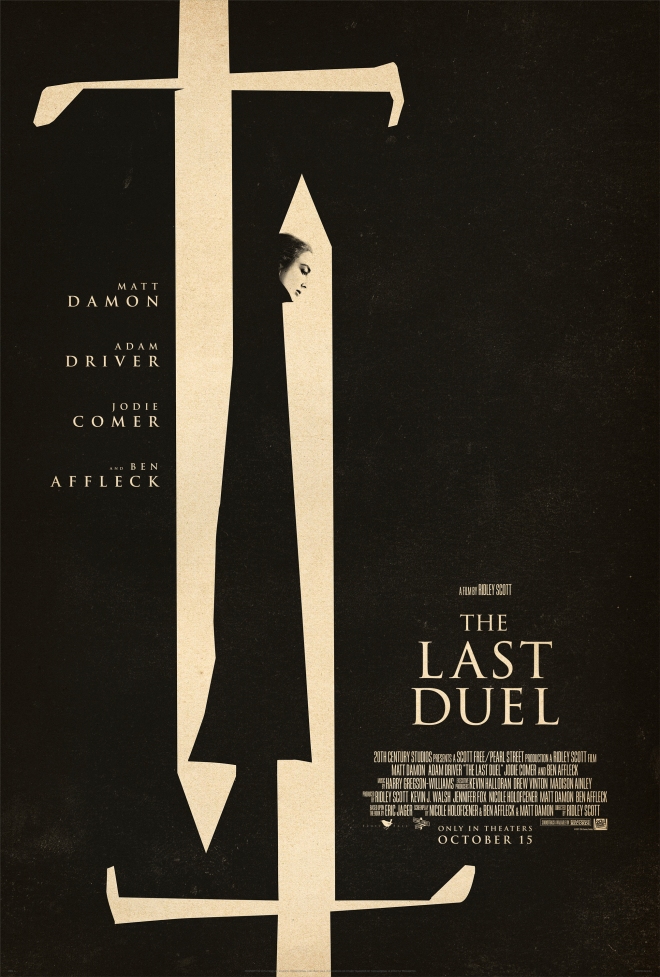 From the man who has brought quite a few larger than life films to us over his career, including 1979’s ALIEN, 1991’s THELMA & LOUISE, 2000’s GLADIATOR, 2015’s THE MARTIAN and another  upcoming film I can’t wait to hit the big screen this year, HOUSE OF GUCCI,  Mr. Ridley Scott has mesmerized millions over the years with his epic pursuits in film.

His latest creation, based on a true story from the Medievil times in France, circa late 1300’s, THE LAST DUEL is no less epic than many of Ridley’s previous endeavors, as we meet Knight Sir Jean de Corrouges (Matt Damon), as he constantly ventures into battle on behalf of the King Charles VI of France (Alex Lawther).  Enter life long friend and Squire Jacques Le Gris (Adam Driver) who has been in battle alongside de Carrouges too, as their friendship has grown since childhood.  When de Carrouges finds himself entering into an arranged marriage with his second wife, Marguerite (Jodie Comer), life seems to be making a turn for the better, as he attempts to settle in to producing another heir, with the loss of his previous wife and son.  But when the pompous, and grotesquely opulent Lord Pierre d’Alencon (Ben Affleck) enters the picture, its seems that Le Gris’s loyal friendship with de Carrouges, is to be cast aside in lue of the partying lifestyle, and womanizing adventures that a life alongside d’Alencon, is now providing.

And as de Carrouges and Le Gris’s friendship falters right before our very eyes, it seems that de Carrouges wife Marguerite’s beauty has now caught Le Gris’s eye along the way as well, unbeknownst to her, or her sword yielding husband.

As de Carrouges excursions on behalf of King Charles VI continue, Marguarite finds herself left alone, when unsuitable suitor Le Gris comes a calling, professing his love for her, and his longing for them to be together.  When Marguarite refutes his advances, Le Gris’s love for her turns criminal, when he rapes her, as he must have her!

Upon the return of de Carrouge, Marguerite shares word of the criminal act that was bestowed upon her in his absence, leaving de Carrouge with no choice but to seek the assistance of King Charles VI to cast upon Le Gris the sentence of death by duel, for the disgrace that Le Gris has brought to him, and his wife, by this unimaginable act.  Standing by her word, even with her execution by fire at the stake looming if her husband loses to Le Gris, husband and wife stand united in saving her honor, even as many of their countryman question her allegations, to the bitter end…

This true story, based on books by the same name written by Eric Jager, is as intense as it is graphically violent, as this portrayal plays out with furver and gallantry, every step of the way.  Ridley manages to bring this epic tale to life, perfectly directing Damon once again, into the stand out leading man, dueling to the death for his wife’s honor. And even more epic this time around, than the perfectly excuted casting throughout, is the way that screenplay writers Nicole Holofcener, Ben Affleck, and Matt Damon saw fit to tell this story from de Carrouges, le Gris and Marguarites’ perspective independently, bringing to light the inconsistances in how each of us views our own experiences.

And as the performances throughout go, I am so hoping that Comer receives a nod this Awards season for her portrayal of Marguerite de Carrouges, as she truly gives the most outstanding performance throughout this film, filing the screen with her beauty and presence.  I enjoyed most of Driver’s performance as the womanizing ladies man, but I also felt we needed so much more intensity from him throughout certain scenes, especially during his lustful encounter with Lady Marguerite, as this is the one time in the film you should be left speechless by what is transpiring on screen, but sadly, it just doesn’t play out that way.  I also enjoyed Affleck’s small, but pivotal role, although I must say at this juncture too that I found it very hard to get past his bleach blond locks, that continued to be distracting for me throughout the entire film.

With its dark and gloomy feel, and its dark and gloomy outcome too, THE LAST DUEL does end up being a fabulous epic portrayal of medieval times, that totally swells under Scott’s direction. I will also share that after viewing this film, I feel it might be better suited for the dudes of this world to enjoy, as it doesn’t even have the trappings of a crippling love story, strewn throughout its midst, to take away from all of its insatiable graphic violence, But alas, I am sure that there are lots of “ladies in waiting” who want to venture out to see these three handsome devils on the big screen too, just remember before you head out ot a theater near you, that you are settling in for 2.5 hours to take in this courageous endeavor!