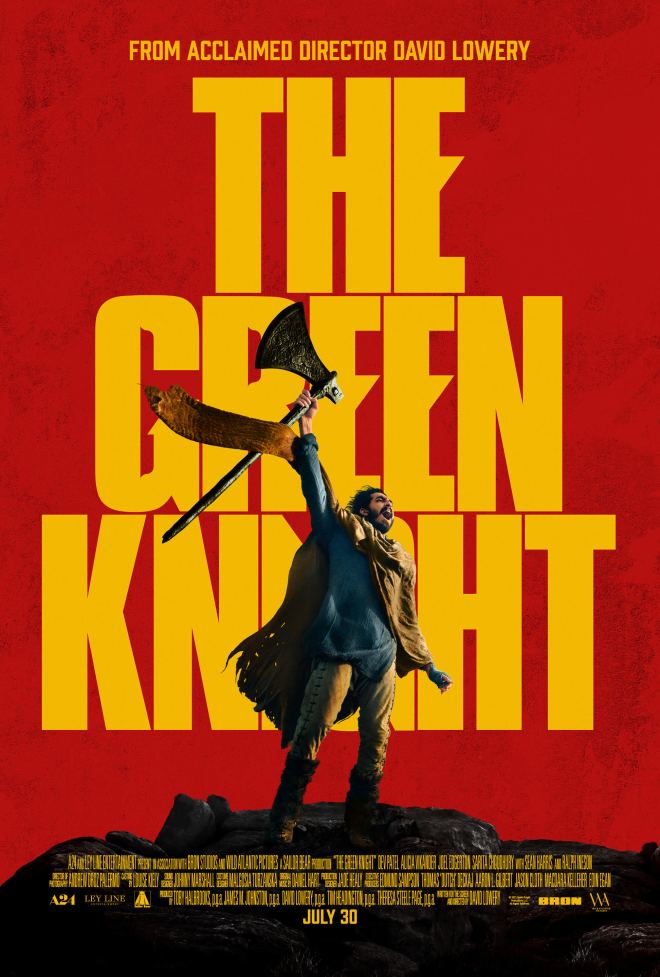 This review is brought to you by TONY MOSELLO

The tale of Sir Gawain (Dev Patel) is well-known, intertwined throughout our history in various ways.  Living a mostly mundane life, Gawain is the nephew of King Arthur (Sean Harris) and has never truly met the King.  In the midst of enjoying the merriment of Christmas, the King invites young Gawain to sit beside him and his Queen (Kate Dickie).  Abruptly, in enters a towering Knight on his horse, disfigured and grotesque.  The Green Knight (Ralph Ineson) offers a game; allowing anyone that his able to land a blow on him a year’s worth of their dreams all coming true, but in one year they must venture to the Green Chapel and have the blow returned unto them.  With no one eager to grant his parlay, Gawain accepts in-hope to gain his honor and become a knight.  As he confronts The Green Knight, the knight lays down his axe and submits.  Full of anticipation, Gawain slices the Knight’s head clean-off; which is met with thunderous applause and joy.  The seasons change and Christmas grows near.  Despite all of the pleading from his lady (Alicia Vikander) and his mother (Sarita Choudhury), Gawain sets-off on his quest to the Green Chapel; both in fear and excitement about what lies in-store upon his arrival.

From the direction of David Lowery, “The Green Knight” is a mystifying, masterful piece of art.  From the opening scenes, you’re quickly informed of how greatly the following sequences will differ from any past iteration.  Absolutely breathtaking and transformative, the film’s cinematography is a revelation; be it the close-up shots or the far panoramic views that provide more than enough details for viewers to grasp at.  Accompanying the camera work is the stunning landscape itself; the gorgeous beauty of nature is on full display and is captivating.  While the visuals pull-you-in, the real star is the raw, calculated, and phenomenal performance from Dev Patel.  Undoubtedly a career-best, Patel’s charisma and emotion binds you to Gawain and leaves you with a non-severable attachment.  The supporting cast including Vikander, Harris, Dickie, Ineson, Choudhury, and Joel Edgerton are a brilliant accompaniment along Gawain’s journey and each add their own unique spin.  Without getting too-much into Gawain’s quest, his segments and trials serve as allegories (the film is littered with them) and lessons to be learned.  Pride, lust, honor, chivalry, desire, and temptation all play major roles and provide their own set of consequences and meaning.  What I found so endearing was how much was left to interpretation.  Over the course of the last 20 minutes, you find yourself questioning everything.  The 125 minutes do seem long at times, as the film struggles with some pacing issues as Gawain’s seemingly-endless journey travels on.    “The Green Knight” is a visual masterpiece and an absolute, for the lack of a better term, mind-fuck of a film; and I mean that with the most sincere amount of praise.  Once you see the A24 logo, you should know by now to just sit back and prepare to have your mind blow