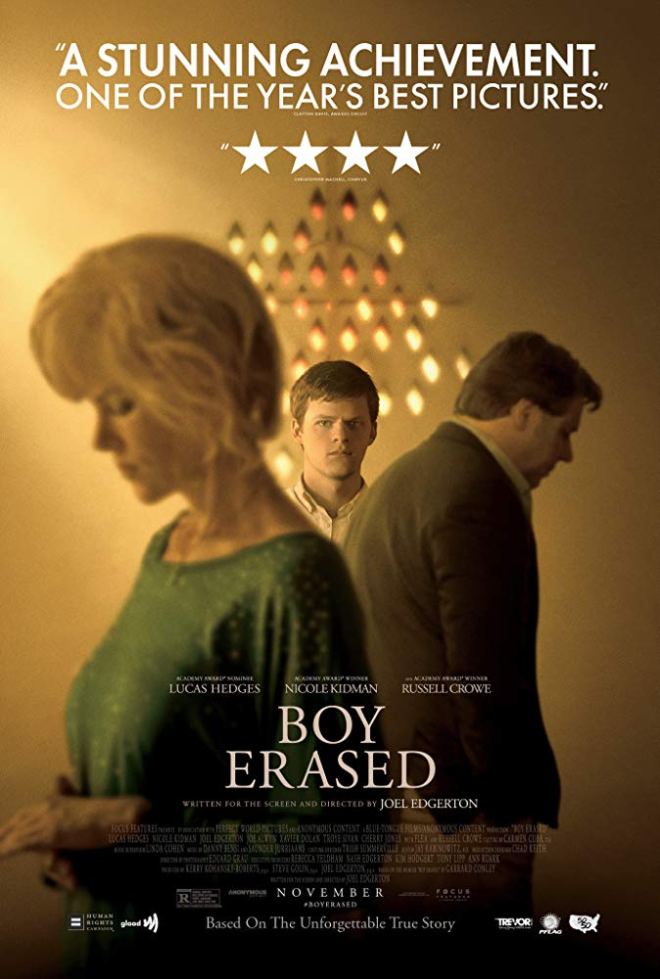 “Jared, God will not love you the way that you are…”  – Viktor Sykes

Based on the true-life story of Garrard Conley…we meet Jared Eamons (Lucas Hedges), struggling to come to terms with the fact that he is attracted to men.  When the time comes that he must share this fact with his Baptist preacher Father Marshall (Russell Crowe) and his loving Mother Nancy (Nicole Kidman), acceptance of his choice to be gay is not accepted.

Forced to discuss “this situation” with the church elders, it is decided that Jared will attend a “Conversion Therapy Camp” hosted by the church, where both young men and women enter to be “cleaned of their sins”, as they attempt to ward off the devil, to become heterosexual.

Jared accepts his fate, as he attempts to “follow the program”, and the teachings of Director Viktor Sykes (Joel Edgerton), but the methods used, and his own heart, are telling Jared that this is not where he, or anyone else who is homosexual, needs to be.

Torn by the anguish of wanting to be “a good son”, and knowing in his heart that he is homosexual, Jared reaches out to his mother to save him from this place, and their teachings…

When Nancy realizes that what she has condoned, with allowing her son to be sent to this God-awful place, she no longer can be silent, standing up for her son, and his sexual preference, hoping that, someday, his Father can come to this realization too…

I give BOY ERASED a rating of MUST SEE ON THE BIG SCREEN!  From the intensely personal true storyline, to the absolutely fabulous performances by Hedges and Kidman, BOY ERASED is one of those films that will stay with you long after you leave the theater.  Director, Writer and Actor Joel Edgerton has created a true gem of a film, as his commitment to every aspect of this film is plausible throughout every frame of what you experience on screen.  Crowe’s performance is noteworthy too, playing the stoic Baptist Preacher/Car Dealership Owner, wanting nothing more than for his son to live a “normal life, complete with a wife, so that his son can give him a grandchild or two.  Emotionally charged, and enlightening too, BOY ERASED is a film that everyone over the age of 17 should see, as its one of those exceptional films that demonstrates the deep love and commitment of family, along with the true importance of acceptance, thus teaching each of us to look within ourselves, and to not cast judgement, lest we walk within someone else’s shoes…