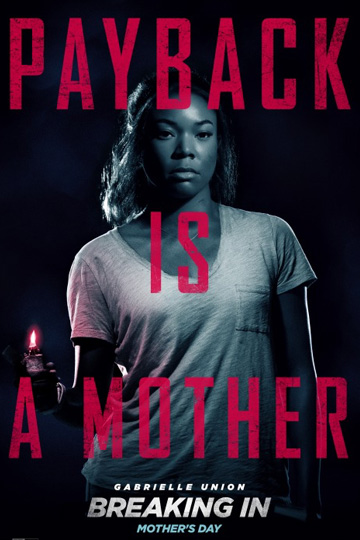 This humble opinion is brought to you by T. K. Edwards

A mother must protect her two children from four men that have broken in to her house.

THIS SEGMENT MAY CONTAIN SPOILERS…

BREAKING IN is your typical generic “home invasion” suspense thriller that Hollywood occasionally throws out there for the movie going audience.  We’ve seen this plot a thousand times over and for some reason we still keep going back for more. Let’s go down the list of what you can expect and you tell me if it sounds familiar.  Let’s begin…shall we? lol

BREAKING IN follows the above points almost to a “T” and although we’ve heard it a 1,000 times over, we as a movie going audience still go to see them.  I’m not saying Hollywood should stop making “home invasion” films, but at least put some original thought into the story. Make it something new and exciting.  As for BREAKING IN, save your money and watch it at home or watch FIREWALL, WHEN A STRANGER CALLS, NO GOOD DEED, HOSTAGE, FEAR OR TRESPASS instead. It doesn’t matter…they’re all the same.  Until next time, thanks for reading.

PS: There are some really great “home invasion” films.  There’s not that many, but here are a few to “keep your faith alive” that good movies can be still be made.